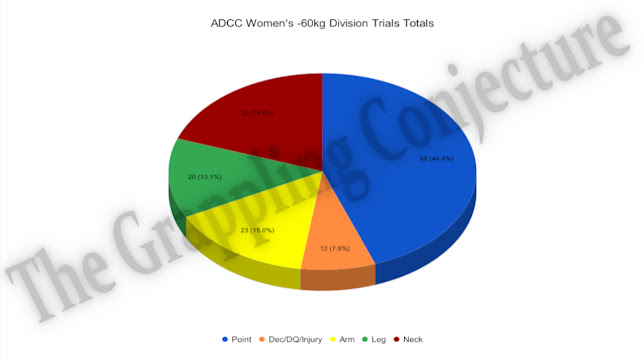 This is a very hard division to predict and I believe there are 3 women who have an equal chance of winning. Bea Mesquita, Bianca Basillio and Ffion Davies have to be the front runners, but the match ups will ultimately determine who will win. Ffion hasn't been able to beat Bianca, but has beaten Bea. Bianca hasn't been able to beat Bea, but has been able to beat Ffion multiple times. There are also quite a few wild cards such as Mayssa Bastos who wins almost everything and has a completely different style from the rest of the girls. Brianna Ste- Marie is also red hot right now.
I expect this division will be dominated by RNCs from the back, arm locks and perhaps ankle locks or toeholds. The female divisions historically haven't had many heel hooks and I doubt many of these women will even attempt them. I think this division will look more like the old school BJJ we saw from ADCC competitors in the 2000s. Most of these women aren't afraid to stand up and wrestle and on the ground I believe many of them will use closed guard.
Overall
I'm expecting this to be a fun division and I imagine there will be quite a few upsets. Many of these women are evenly matched and I think it's going to be hard for anyone to blow the others out of the water. While I'm expecting action, I don't think there will be many quick finishes. Very few girls have that quick submission ability and most prefer to play a positional game with subs being the icing on the cake instead of the main dish. All the women, except for Julia Maele, are well established with styles that the other women should be somewhat familiar with. I don't think there will be too many tricks or secret moves. I'm predicting it will come down to physical attributes and heart in this division. Anyone can win here and I think this will be a enjoyable division to watch.
ADCC 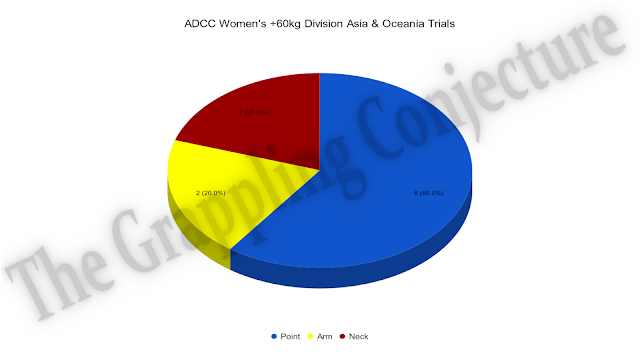 What we learned from the ADCC Asia & Oceania Trials

These were the last trials before ADCC 2022 and now most of the spots have been filled for the tournament. I think we went out with a bang with these trials. The Asia/Australia/Oceania trails had the date and location changed and because of that many competitors didn't come. That is of course a shame, but the athletes that were there went all out and made this a great event, even though it had less coverage than the other trials.  You could also call this "uke-fest" since these trials featured many of the people you've seen in Craig Jones and Lachlan Giles instructionals. Craig and Lachlan were both there, but this time purely in a coaching capacity. Enough chit-chat, let's see who won.  Winners Men -66kg Jeremy Skinner def David Stoilescu via kneebar -77kg Kenta Iwamoto def Siraj Soufi via points (2-0) -88kg Roberto Dib Frias def Ben Hodgkinson via points (2-0) -99kg Izaak Michell def Anton Mineko via points (2-0) +99 Josh Saunders def Daniel Schuardt via 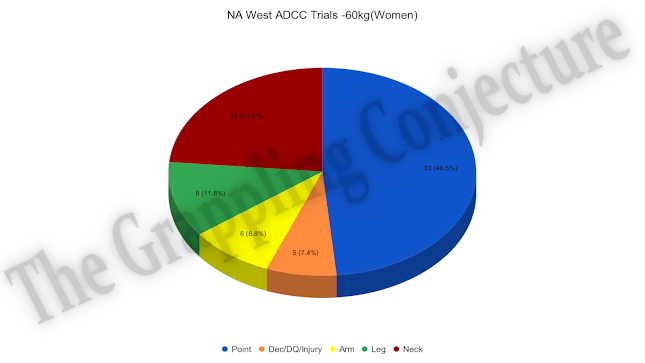 The 2022 North American West Coast trials have now ended and we have 7 new winners headed to ADCC 2022. This event is a must watch and might be one of the best grappling events of all time. Usually there is some complaint about a lack of action or stalling, but I don't think anyone can say that about this tournament. All of the athletes were going after the kill and really showing their skills. Surprisingly I don't feel like many people were gaming the rules either. There were a few people who played it cautiously until the points period started, but once it did they hit the gas hard trying to get the submission. This event exceeded my expectations and I hope this will inspire people in the future to compete like this.  The only disappointment I have is that more people can't enter ADCC. There were a number of people who lost that I thought would do great there and possibly medal. I'm hoping some of them get picked up by WNO and used on future shows.  Winners Men -66kg 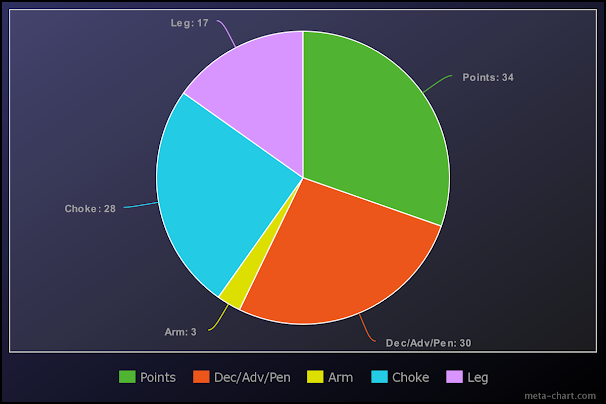 What we learned from No-gi worlds 2021

The 2021 No-gi worlds finished a few days ago, so I thought I'd go over some things I saw and talk about some trends.  New faces With the addition of heelhooks, some people entered that previously hadn't participated in No-gi worlds. People like PJ Barch and Oliver Taza decided to compete which is great. It nice to see less of a divide between the IBJJF and professional grappling.  On top of new people coming from the pro scene I'd say the adult division was mostly filled with new comers who have received their black belts in the last few years or so. These new athletes seem to have adapted to the new rules and are hungry to prove themselves. I believe the only champion that was able to successfully defend their title was Roberto "Cyborg" Abreu. I believe that as others speculated, the new rules turned things on their head and some of the athletes were able to capitalize. It seems many were motivated by WNO and were requesting spots on up coming shows after their